Kendo techniques are actually very simple. Yet it is pretty hard to learn and execute.

In kendo, techniques are categorized into two; shikake waza and oji waza. Waza is technique in Japanese. 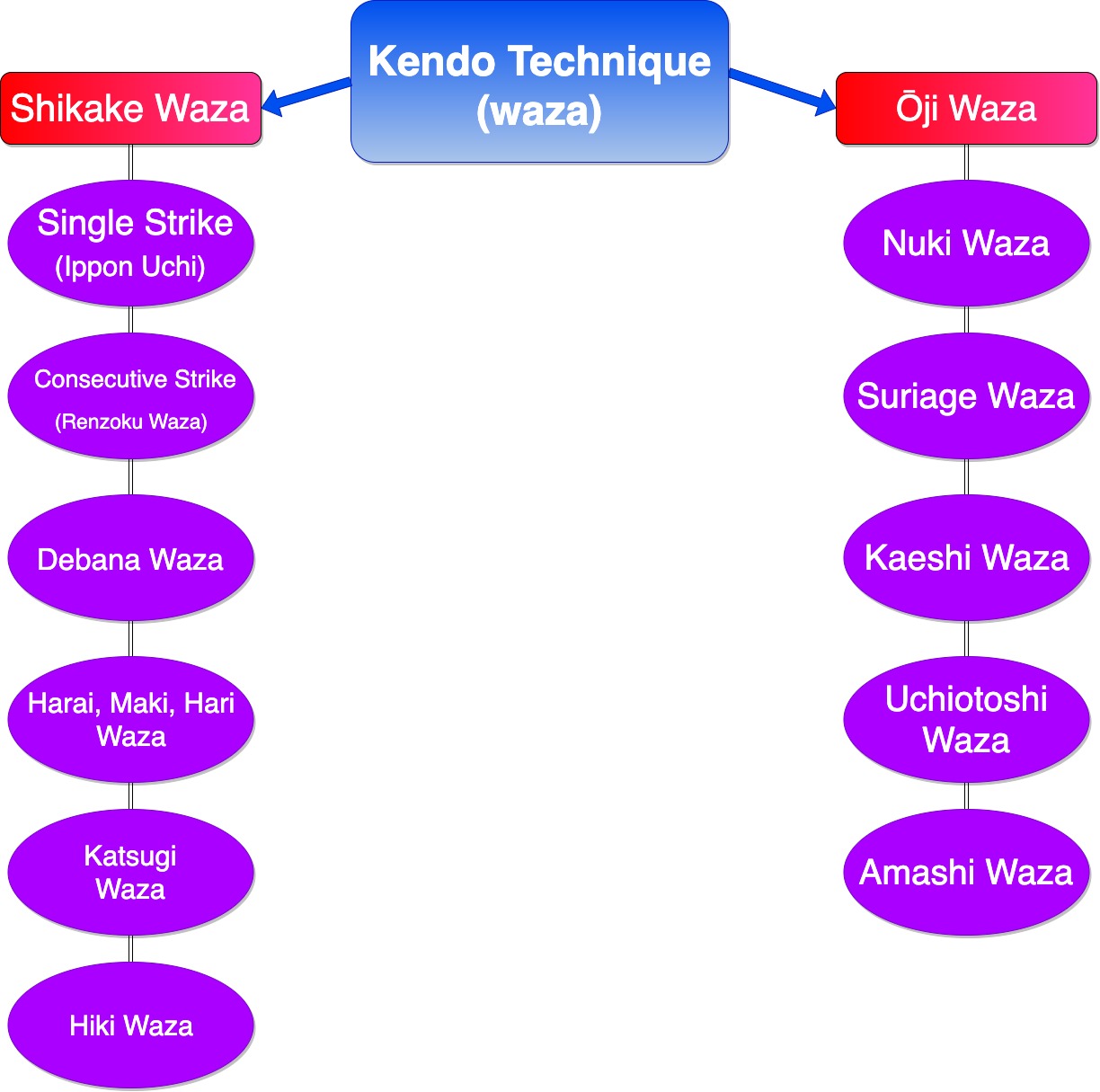 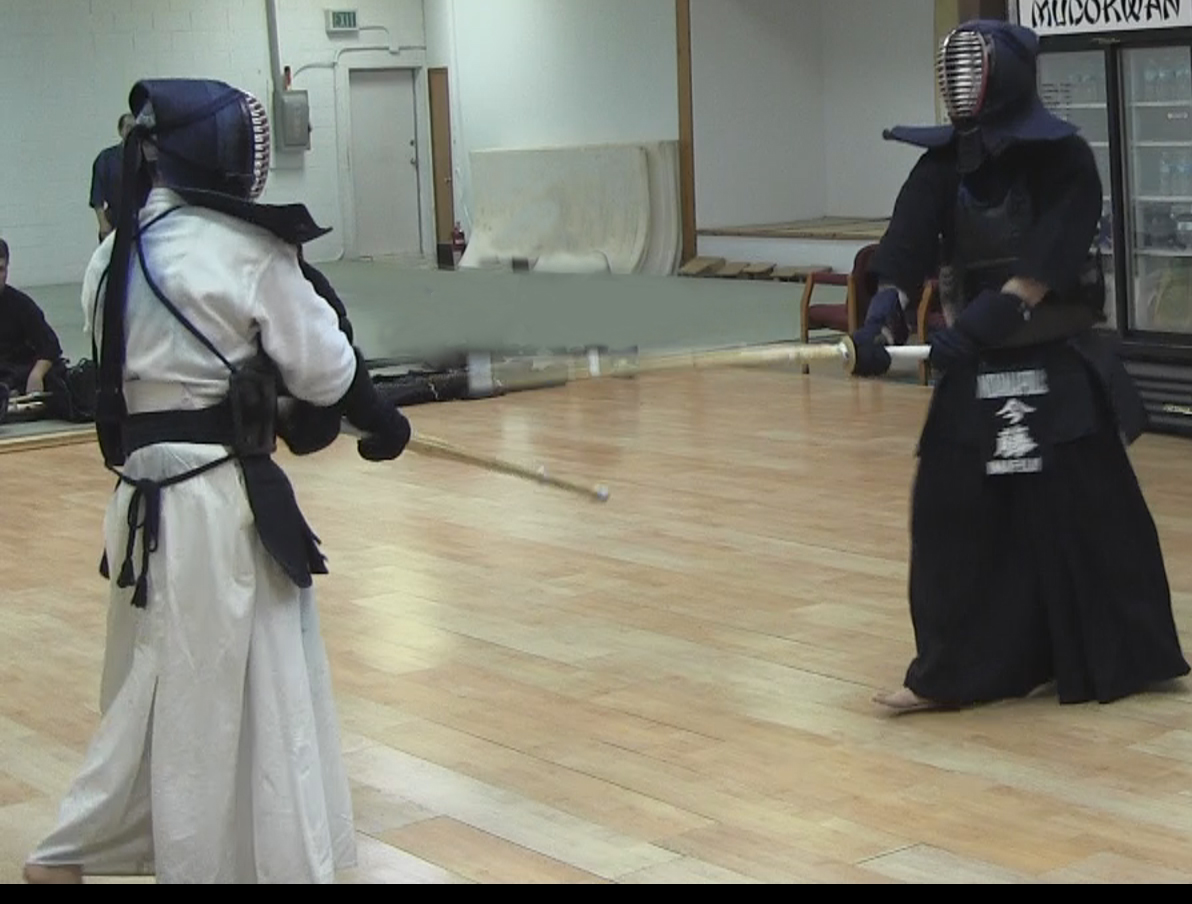 Why do we strike consecutively?

I do not want to think that the first and/or second strike of these consecutive strikes are fake. “Fake” is to trick your opponent. We want to fight fair and squire. That is the golden rule in kendo.

You execute your attack fully so that it can be a valid cut. However, you know your opponent will react to your first strike (you are anticipating) so you execute another strike.

All the strikes should be fully executed in consecutive strikes.

Debana means “just about to happen/start”. It is also called "degashira". The same meaning but a different way to express it.

In debana waza, you strike men or kote at the moment when you sense your opponent’s intention to execute his/her attack. Debana-men and debana-kote are most commonly used kendo techniques. 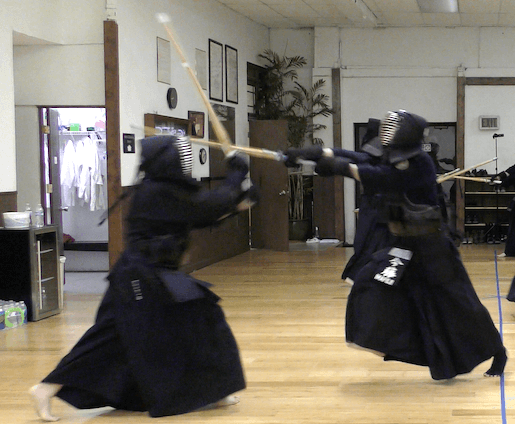 The techniques introduced here are to kill your opponent's sword. Click here for more information on "san-satsu".

Harai waza: Harai means "sweep". You may have heard of "ashi-barai" in other martial arts such as judo and karate. As ashi-barai is translated as "foot sweep", you sweep your opponent's shinai.

In harai waza, you sweep your opponent’s shinai away from the center with your shinai. It is commonly used to make an opening and strike. Harai-men and harai kote are popular kendo techniques.

You should be careful when you use "harai". If you make it too big, you will be vulnerable since your kensen will be also away from the centre.

Hari Waza: Hari is very similar to harai but it is more like a "slap". It is very hard to distinguish between "harai" and "hari".

Maki waza: In maki waza, you hook your opponent shinai with your shinai and spin up or down your opponent’s shinai.

If you execute this technique with the right timing and the right amount of strength, you will actually spin off your opponent shinai from his/her hands.

Maki-age starts around 0:24 of the video.

Katsugi waza: This is a technique most often used to surprise your opponent. There is a time that you cannot find any openings after you tried everything. This is the time for you to use a katsugi waza.

Katsugi is a noun form of “katsugu” that means “to carry on your shoulder”. So in katsugi waza, you lift your shinai towards your left or right shoulder instead of above your head and strike kote, men or do. 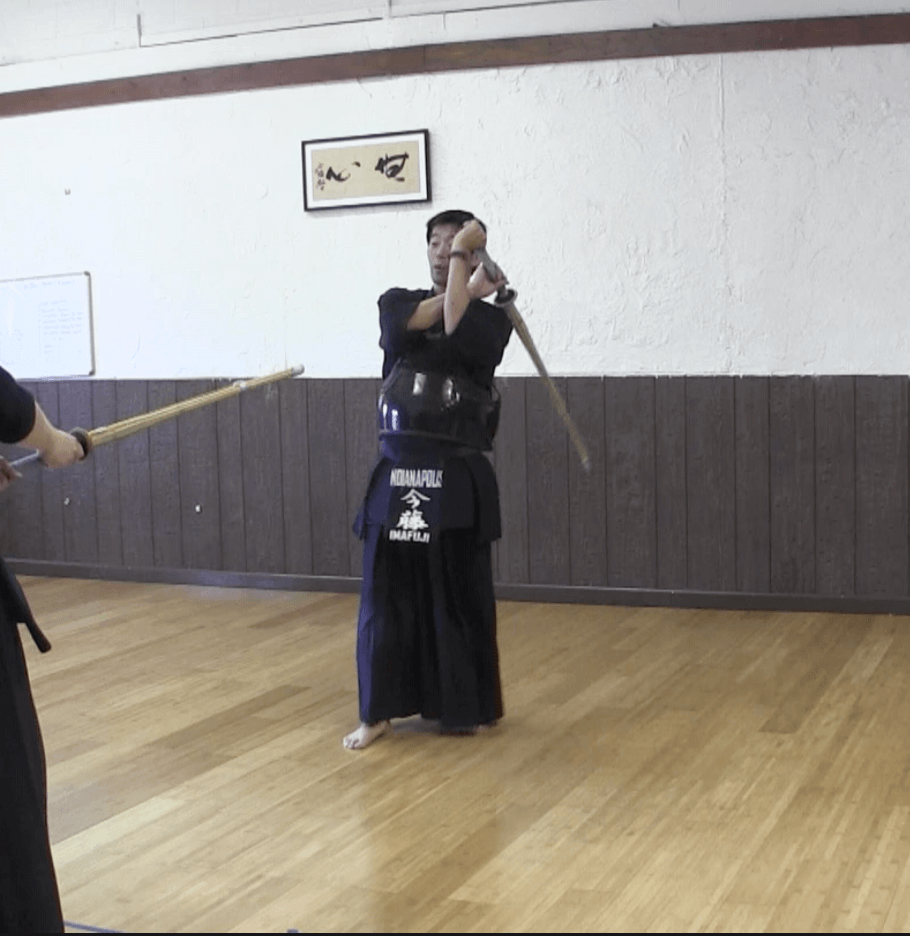 Katsugi Waza to the Left Shoulder 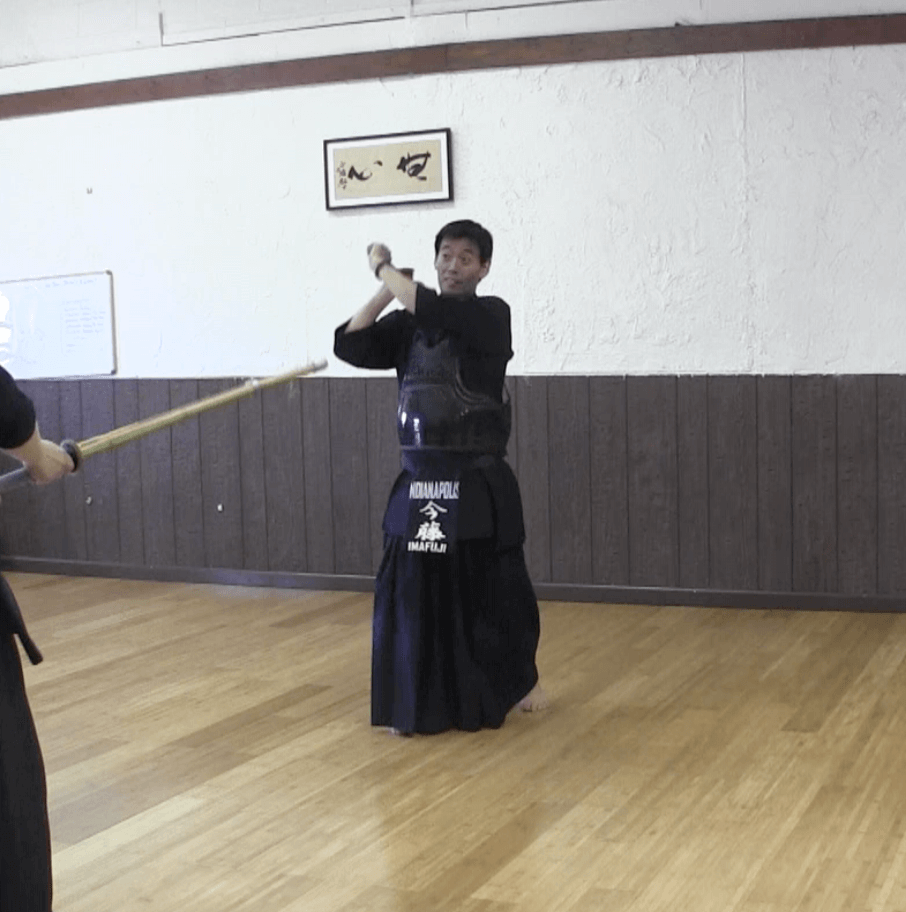 Katsugi Waza to the Right Shoulder

As you can see, you have openings too. So when you do this, you do it with full commitment. The katsugi to the left shoulder is more common than the one to the right shoulder.

Hiki waza: In hiki waza, you strike hiki-men, hiki-kote or hiki-do from tsubazeri-ai. Hiki means “going backwards” in this case.

Oji (ouji) waza is basically counterattack techniques. You react to your opponent’s attack.

Even though you react and counterattack your opponent, you do not want to be in the state of “fleeing”. Before executing an oji waza, you should already win the mind game before actual striking happens. In other words, you should make your opponent to strike as you want (ideal).

In kata No.7, you avoid your opponent’s men cut by just moving to the right while striking your opponent’s do. Men-nuki-do is also introduced in Bokuto niyoru Kendo Kihon Waza Keiko-ho (kihon 5).

Kaeshi-waza: Kaeshi waza is seen in kata No.4 (tsuki-kaeshi-men). In kaeshi waza, your wrists rotates to strike a target. In kendo, men-kaeshi-do is most commonly used. Some people are good at kote-kaeshi-men.

Uchiotoshi: Some people say it is the same as kiriotoshi and others disagree with that. Kiriotoshi is the ultimate technique of Itto-ryu. Men-kiriotoshi-men is considered to be the most difficult technique.

It is similar to ai-men (both striking men) but your sword cuts your opponent before your opponent cuts you. So it looks like men strikes in kata No.4, in which both uchitachi andshitachi strike men. Then if one uses kiriotoshi in that situation, he/she can cut his/her opponent. It is one motion.

However, uchiotoshi is two motions. What you do in uchiotoshi, you knock down your opponent’s shinai coming towards a target and strike. Uchiotoshi means “to knock down”.

So in Kihon 9 of Bokuto niyoru Kendo Kihon Waza Keiko-ho, you knock down your opponent’s do strike and strike men.

Uchiotoshi waza is very rare in the modern kendo because strikes are too small for us to execute this technique.

There are more techniques that are not listed here. Some of the techniques listed here are already very advanced. So probably if you are not 4th dan or above, you do not have to worry about other techniques such as katate (one-handed) waza.