Is this Ippon or not?
Tell us what you think? 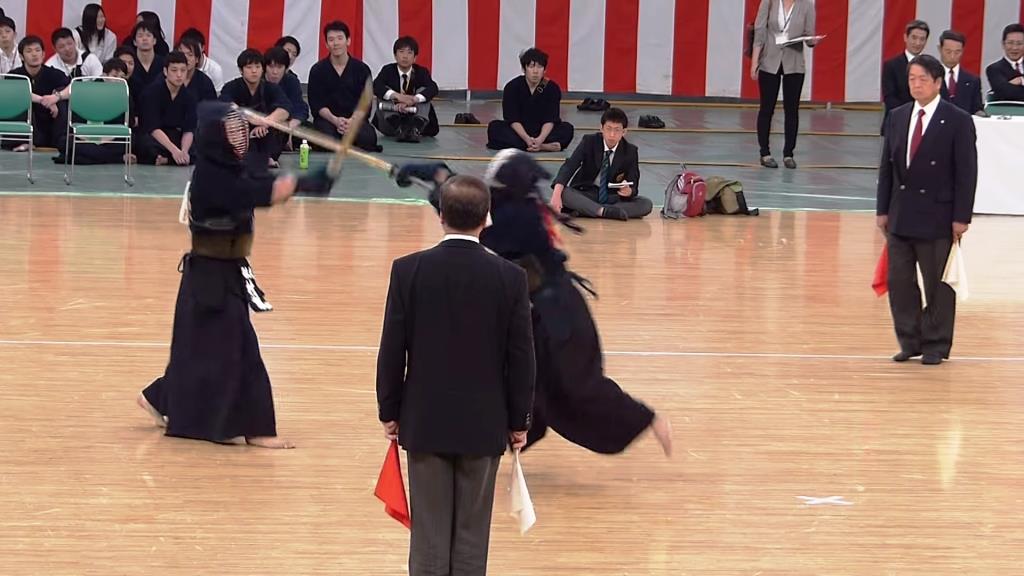 First of all, please watch this video and think what you think about this men strike. This is the final match of All Japan University Championship in 2014.

If you just see this photo, obviously this men strike was not done with the monouchi. Just the tip of the sword is touching the men-gane. If you see only this picture, it is not a point.

This has nothing to do with the question I’m asking here, but this men strike reminds me of Takanabe senshu.

This is why kendo is not a “hitting” game. I am sure that his opponent also thought it was a good men strike even though it was a bit short. He knows that he was not ready for that.

What do you think?

If you base it strictly on the still picture that you showed us, then no, it’s not a valid strike. I still believe that at the moment of impact, his tenouchi was too high, but as I stated in a previous comment, I’m not a qualified shinpan, so what I judge to be invalid appears to have been judged valid by three qualified shinpans, as well as the officials who were looking on behind the judges’ table.

In Reply to Joe Clark

Thank you for sharing your opinion, Joe san! And why do you think he got the point then? It looks like all the 3 judges agreed.

He indeed created an opportunity, but his distance was miscalculated. Hitting mengane is like hitting the air, and liking itmor not, the objective is to strike some one with kiken tai, yuko datotsu on datotsu bui and keep zanshin after that.

It reminds me the men kaeshi dou that was nicely executed by Eiga against Miyazaki, but the point was awqrded to Miyazaki even that his attack wa blocked by Eiga’s kaeshi dou, and the shinpans instead of accepting their mistake, they came up with “we can award a point which isn’t a point but nwe thought it was a point”.

In Reply to Roberto

Thank you for sharing your opinion. And why do you think all the three judges gave me him a point. Did it look like a point to you just watching the video without considering the picture?

I think the two players were just out of Chikai-Ma-ai to Issoku-itto-no-maai for a second. Then, the Red player suddenly went into the his good attacking distance and did a men strike.

I watched Alex Bennet Sensei’s interview of his 7dan grading and also Inoue Yoshihiko Sensei’s presentation of the difference of Ippon and Yukodatotsu.

As I could understand from Bennet Sensei’s video: if seme is not clear nor existed against the opponent, even a clear cut could not be awarded while the opponent is still in control.

From Inoue Sensei’s video: “a Yokodatotsu indicates there has been an effective waza showing advantage to the attacker but it is generally not incontestable. However an Ippon requires a desperation as if ones life depends on the action, without the attitude, Ippon will not result. ”

The Red player, however, did not show a clear seme nor attempt to land a 100% perfect scoring cut (from my watching).

I think it is extremely difficult to judge mental domination and the feelings of viewers are really really different between the online video and on the site of Shiai Jo. Both 2 players have been through many tough battles and they are very tired of a nearly 10 mins shiai. The judges maybe more focused on the mental level of two players and as Imafuji Sensei you said” he has Ki Ken Tai Icchi” and gave him a point.

As I has not been to the shiai jo nor got more closely to watch their fight. Due to:

My opinion is not an Ippon.

In Reply to Higen

Thank you for sharing your opinion. I have many interesting opinions at a different wall (my personal facebook wall). All of them said, it is not a point :)

In Reply to My Reply by Higen

Although I said it is not ippon from a video, I still believe the judges gave him a point on the shiai jo because his strong and beautiful fumikumi, Ki Ken Tai Icchi and his confidence, and (as you said ) “took his opponent off guard” The rad player was in control for maybe just half second and his opponent was not ready to do an Oji waza, may be a Kaeshi do?

One of my Sensei was the champion of Gyokuryuki, he said this moment happens a lot in high school and university matches and the judges will give students a point if they showed many characters I mentioned above. And lots of things such as momentum (Ki) on the Shiai Jo will be lost from just watching videos only.

I am just a learner of Kendo and I hope more Sensei could share their knowledge and opinions for us to understand and learn what a real Ippon is.

Home > Thoughts on Kendo > Is this Ippon or not? Tell us what you think?